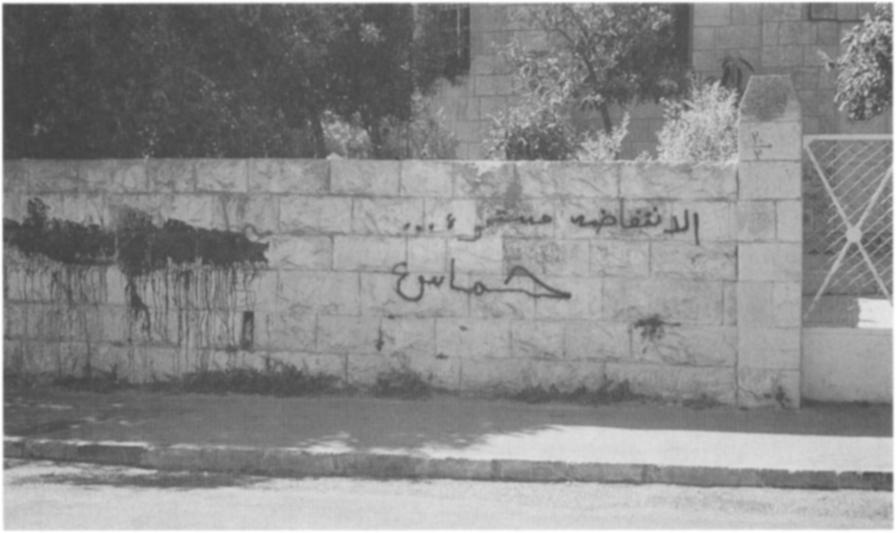 "The intifada continues... -Hamas." On the left, a splash of paint blackens out previous graffiti. (Peteet, 1996)

Graffiti became an essential tool of the Palestinian people in their resistance against the Israeli occupation and repression.

Because of Israeli censorship and the absence of traditional media graffiti became the tool of mass communication during the first intifada between 1987 and 1991.

The Palestinian people used graffiti “as a noticeboard, changing daily, telling the population of developments such as attacks on Israeli forces, claiming martyrs, calling the people to demonstrations.” (Rolston, 2014)

Graffiti was a clear symbol of resistance so the Israeli army worked tirelessly to repress it by blacking out the messages and fining residents for permitting graffiti on their homes.

During the second intifada in 2000, the graffiti showed the difference in opinions of the two Palestinian factions. Hamas’ graffiti urged the Palestinian Authority to “Stop all negotiations with the enemy” (Rolston, 2014). 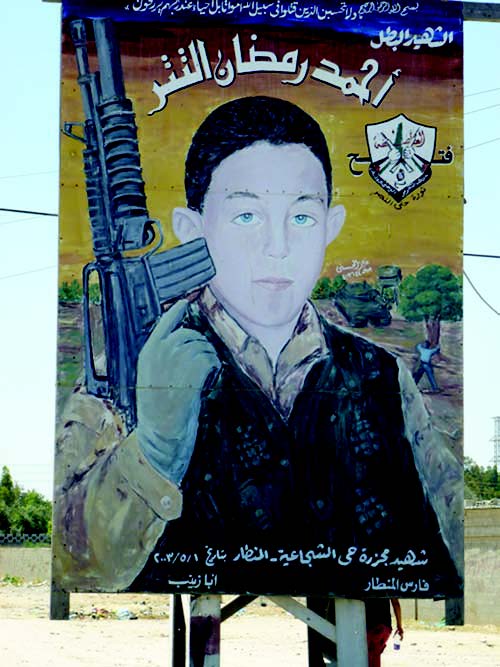 A Fatah martyr, Al-shajayeh, Gaza Strip. Text reads: ‘Think not of those who are dead in Allah’s way as dead. Nay, they live in the presence of their Lord’ (a Koranic verse). ‘Hero martyr. The martyr of Al-shajayeh neighbourhood, 1 May 2003.’. (Rolston, 2014)

Hamas meanwhile – as an Islamist organisation – believed it “was a duty to paint words from the Quran with the greatest care and attention” (Rolston, 2014, p.47) so began to pay more attention to the calligraphy of their graffiti. 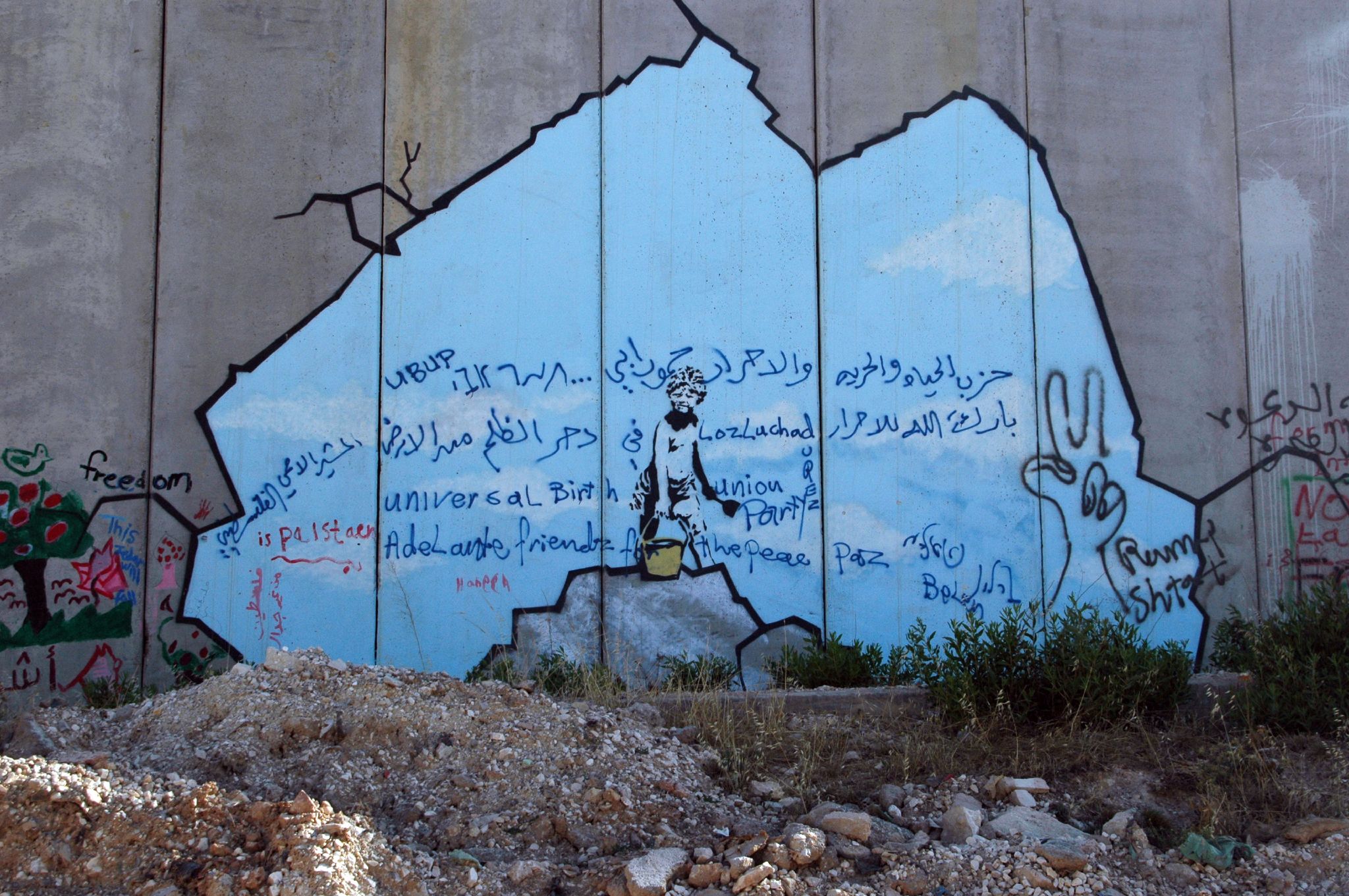 Western graffiti artists have brought international attention to the area by painting murals on the Palestinian side of the separation wall. These were not universally well received though “These images are mildly provocative , but they were not created by and have little to do with the daily realities of most Palestinians. Although this work is intended to by altruistic, it is also an expression of ego, and it appears that some in the local population understood it as such” (Hopper, 2013) 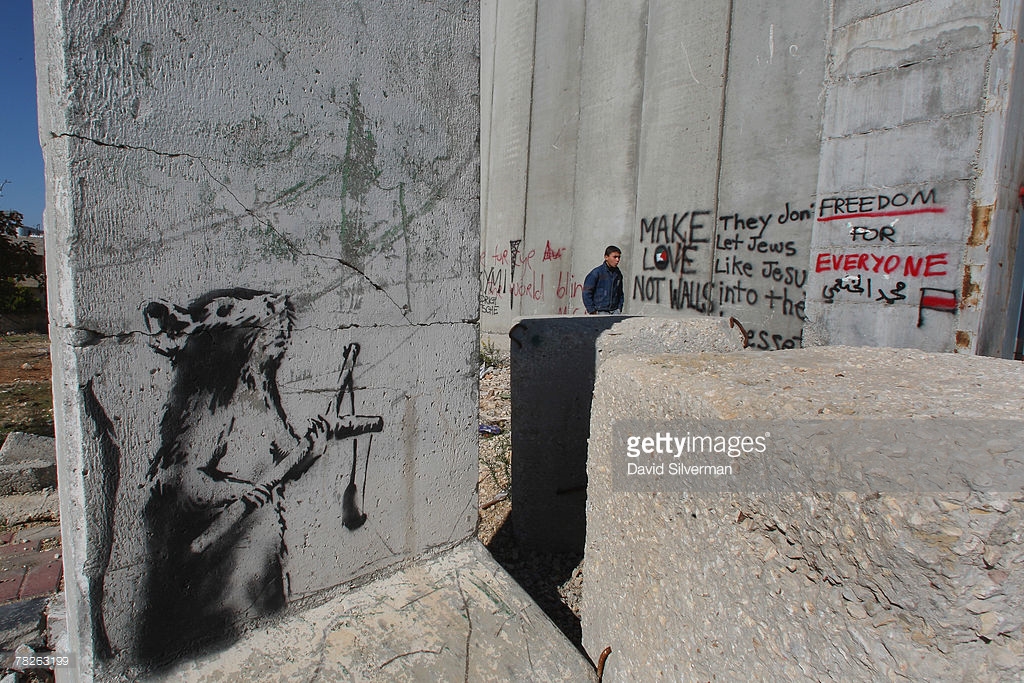 In relation to Banksy’s trademark rat making an appearance on the separation wall, one resident stated “we don’t make jokes about kids who sacrifice their lives for their land. They are not rats – they are lions.” (Harrison, 2007)

On the wall of Alazher university, Gaza City (Rolston, 2014)

When the Israeli army withdrew from Gaza in 2005 it meant the people had freedom of movement within Gaza as such they were free to paint at leisure.

This led to diverse works of art that made the West Bank graffiti look like “simple scribbles” (Gröndahl, Gaza Graffiti, op. cit., p. 50.) but in 2007 when Hamas took military control of the province graffiti was restricted to only one voice.

After two decades of using graffiti as a resistance tool, Hamas began to use graffiti to publicising their new Islamic moral code on dress and behaviour. As an ironic twist, Hamas began using graffiti – once a tool to defeat censorship – to censor images of women that had been painted with free flowing hair.

For Palestinians graffiti was a key communication tool and notice board, it was also a powerful symbol of resistance and showcased the breakdown of Palestinian-Israeli relations.

For Israelis, it was a direct challenge to their control.

There has been a recent discussion in the media recently about the commercialisation of academic work. Typically academic papers cost around $30 each to download, most students are able to avoid this as their institutions subscribe to the large academic publishers are thus the

After reading Alex Steffen's book Worldchanging recently one of the articles really stood out. The concept of the lawn as a toxic, alien landscape. His words are incredibly poetic and really drive the theory home. Why has such an unnatural crop become so ingrained